The map, which was created by the New Mexico Museum of Space History (nmspacemuseum.org) and includes 52 specific locations, starts on a mountaintop called Wizard’s Roost, an archeo-astronomy site in Lincoln County where stones were aligned to the summer and winter solstices during prehistoric times. The map ends with Socorro County’s Magdalena Ridge Observatory, one of many modern-day astronomical observatories in New Mexico.

It isn’t much of a tourist’s guide, however, since most of the sites are closed to the public because of preservation or security concerns. But the map does highlight the fact New Mexico has a rich history, and a promising future, in space observation and exploration.

Chris Orwoll, executive director of the New Mexico Museum of Space History in Alamogordo, said there’s a good reason why New Mexico was and is a popular place for stargazing.

The museum Orwoll oversees — actually, it’s a collection of four facilities, including the International Space Hall of Fame — is expected to top 90,000 visitors this year, but that’s only part of what its staff is doing. They are also helping create a new visitor’s center for Spaceport America, the world’s first spaceport designed for commercial traffic.

Near Truth or Consequences in Sierra County, Spaceport America officially opened in 2011 — but it’s expected to become a lot busier next year when Virgin Galactic gets up to speed.

Virgin Galactic, owned by billionaire Richard Branson, plans to provide space tours — the first such service on Earth — beginning in 2014. The first 500 tickets, at $200,000 per ticket, are already sold.

Meanwhile, Virgin Galactic and the Raton school district recently announced their partnership to develop an aerospace career education program to be based in Raton, a first of its kind endeavor in New Mexico and likely in most other places too. Officials hope the program will eventually branch out across the nation and worldwide through the Internet, as well as bringing students to Raton for summer space-related education programs.

A group of local students participated in a visit to Spaceport America following a visit to Raton last month of two Virgin Galactic managers. In addition, Raton schools Superintendent Dave Willden serves as executive director of the newly formed New Mexico Aerospace Aviation Educational Alliance, which has a goal of finding ways to increase educational opportunities in aerospace-related fields.

The partnership of the small Raton school district and the international company emerged as Raton school officials and students lent their support — and even some lobbying efforts — to getting state legislation passed earlier this year regarding limits on legal liability for space-related firms. The bill was key to Virgin Galactic setting up its operational headquarters at Spaceport America.

The latest tenant at New Mexico’s spaceport is Space Exploration Technologies Corp., or SpaceX, which plans to launch its reusable Grasshopper rockets. The spaceport’s first tenant, UP Aerospace, a private corporation based in Denver, has been conducting vertical launches at the spaceport site since 2006.

These are commercial operations, but the infrastructure being used comes from the state’s many militaries, research, and testing facilities.

New Mexico has a strong Air Force presence, with bases at Clovis, Alamogordo, and Albuquerque. And there are numerous research and test facilities, mainly in the Albuquerque and Las Cruces areas. Then there’s the White Sands Missile Range, known as the White Sands Proving Ground more than a half-century ago when the space age was born.

In 1929, physicist and inventor Robert Goddard, widely regarded as the father of modern rocketry, relocated to Roswell to build and test his rockets. Then, in 1945, scientist Wernher von Braun launched the first V2 rocket into space, ushering in the space age.

Then there was the Air Force’s 1947 press release that a “flying saucer” had been found several miles outside of Roswell. The Air Force retracted the story, but the incident lives on to this day (and led to the founding of the International UFO Museum and Research Center in Roswell).

Since those heady first days of the space age, New Mexico’s space industry has grown with Sandia National Laboratories, a non-nuclear testing facility at Kirtland Air Force Base; the Very Large Array, one of the world’s most sophisticated radio astronomy observatories located in rural Socorro County; the National Solar Observatory at Sunspot near Cloudcroft; and many other space-related facilities throughout the state.

Those facilities and their activities are primarily funded through private grants or by the government, but the number of for-profit companies in the state is growing. The state Economic Development Department lists more than 50 space-related companies headquartered or doing business in New Mexico.

Still, finding hard data about the space industry’s contribution to the New Mexico economy proved difficult. There are readily available statistics on the aviation industry and its 61 public-use airports around the state, but Internet searches for data specific to the space industry were unsuccessful.

“That’s probably because a lot of it is classified,” said Pat Hynes, director of both the New Mexico Space Grant Consortium and NASA’s Experimental Program to Stimulate Competitive Research. The consortium works with three research universities in New Mexico — the University of New Mexico, New Mexico State University and Eastern New Mexico University.

Hynes said that when it comes to the space industry, the overlap between government and commercial work is significant. “There is a lot of sharing of resources,” she said.

For example, NASA and the Air Force use the White Sands Missile Range and its restricted air space in a variety of tests, some of which involve SpaceX. Hynes said between 1,000 and 1,200 workers are employed at the Air Force and NASA facilities in White Sands alone, but because of national security concerns, a lot of information isn’t publicly available.

So what does the space industry contribute to the New Mexico economy?

“It’s in the billions,” Hynes said. “That includes a lot of government funding…So when non-government funds are involved, that’s even better for our state.”

New Mexicans, through their tax dollars, have made a sizeable investment in the commercial growth of the space industry. To construct Spaceport America cost $209 million in taxpayer money. 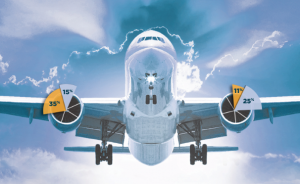 That was a bone of contention in 2010 when Susana Martinez was running for governor. She wanted to see more private investment, and a bill she signed in March took the spaceport in that direction. The bill — which, as a result of coincidental friends and professional relationships, Virgin Galactic asked Raton’s Willden for help in supporting — provides liability protections for spaceport vendors, something that Virgin Galactic officials had hinted could be a deal-breaker if not in place. After Martinez signed it into law, Virgin CEO George Whitesides praised it as an important milestone for the spaceport’s commercial development.

Such developments are the reason why Site Selection, a magazine for corporate CEOs, said New Mexico is experiencing “a sonic boom” in aerospace investment lately, with companies pulling up stakes and relocating their headquarters to the Land of Enchantment. The magazine focused on an announcement last fall that Air USA, a tactical aircraft services company, was moving its corporate headquarters to Albuquerque.

Hynes said the increase in commercial operations is a sign of future growth for the state.

“We’re a hotbed for the future,” Orwoll said. “The future here is extremely bright.”

We believe that the aim for knowledge should always be fulfilled. Whether you are looking for insights about marketing, top stories, politics, shopping, automobiles or lifestyle, Bailey got you covered!We aim to provide quality and creative compositions to correspond to your needs.Bailey is the leading source of an array of insights and information.